The primary Hmong 101 program presenters are Txongpao Lee and Dr. Mark E. Pfeifer. Mr. Lee and Dr. Pfeifer have presented the Hmong 101 curriculum to more than 7,000 persons since 2003. 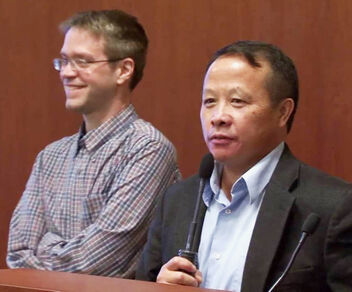 Txongpao Lee has been Executive Director of Hmong Cultural Center since 2002. He moved to Minnesota with his family as a refugee in 1984. He serves as a Mej Koob (Hmong marriage ritualist) in the Hmong community of Minneapolis-St. Paul and is an active leader in the Lee Clan Association of Minnesota.
Dr. Mark E. Pfeifer has been Director of Programs at Hmong Cultural center since 2000. Pfeifer holds a Doctorate in Geography from the University of Toronto, a Master's in Urban Studies from Temple University and a Master’s in Library Science from the University of North Texas. Pfeifer is also a Lecturer in Anthropology for the State University of New York Institute of Technology and Empire State College in New York state. He has been the editor of the Hmong Studies Journal, a peer-reviewed scholarly journal (www.hmongstudiesjournal.org) since 2003. Pfeifer published Annotated Bibliography of Hmong-Related Works 1996-2006 with Scarecrow Press in 2007. He was co-editor with Nicholas Tapp of A Hmao (Hua Miao) Songs, Stories and Legends from China published by Lincom in 2009. Pfeifer is co-editor with Dr. Monica Chiu and Dr. Kou Yang of Diversity within Diaspora: Hmong Americans in the Twenty-First Century, published in 2013 by the University of Hawaii Press, an edited scholarly volume of articles related to the experiences of Hmong Americans. Pfeifer is also editor of Annotated Bibliography of Hmong-Related Works: 2007-2019 from Hmong Educational Resources Publishing.